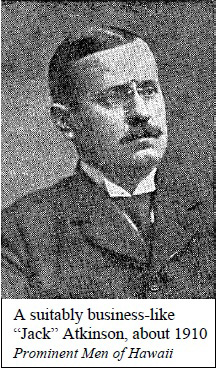 Dateline Honolulu: April 15, 1901
At the organizing meeting of Elks 616, founding members have elected high school drop-out A. L. C. Atkinson as one of their first Trustees.

Now the rest of the story:
Alatau Leonard Charles Atkinson, “Jack” to family and friends, was born at Auwaiolumu, Oahu, Sept. 12, 1871, into a family of status, but not wealth. Status: his father worked as Hawaiian Gazette editor, headed public schools, was census taker, and served in the 1898 House of Representatives. But not wealth: one daughter eloped lest her father go into debt putting on a ‘proper’ wedding; Jack went on living at home or with relatives long after he was employed.

At 15 Jack became a ‘drop out’, leaving school to work 8 years at Theo H. Davies as a clerk. Among the feats of his youth is the claim to be first to bicycle from Hilo to Volcano, 31 miles, over unpaved roads.

Graduating in 1898, he returned to the newly made Territory of Hawaii. Family connections probably account for an immediate 1 year appointment as an assistant to Territorial Attorney General, W. O. Smith. A three year law partnership was formed with fellow Elk A. F. Judd, Jr. in 1900.

A founding member of Elks Lodge 616, A.L.C. stuck with the Elks until his death in 1927. He served on the by-laws and building committees during the lodge’s formative first year. He belonged to the Pacific Club, and was a Mason.

From a sense of civic duty or good business practice, Atkinson served on many boards and commissions. He had extended terms on the territorial supervisory boards of the Archives, Immigration (1907-1913) and Agriculture and Forestry (1919-1925). When bubonic plague struck the islands in 1900, Atkinson worked on Oahu and Maui in what today we’d call Civil Defense efforts. In 1913 he joined the group raising funding to sponsor the athletic activity of a youthful Duke Kahanamoku. During World War I, Capt. Atkinson served 2 years in the US Army, Quartermaster Corps.

Finally in 1914 A. L. C. got a place of his own, “Puuloa Ranch.” Located about 6 ½ miles by rail from downtown Honolulu, photographs show an airy, open, comfortable wood frame building you could walk into with your boots on.

In the monarchy period, Atkinson preferred US annexation to widely feared alliances with Japan. In the early 1900s, A.L.C. worked to limit what he feared would be Asian domination of Hawaii and supported using Hawaii’s homestead law to encourage immigration of “Americans” to Hawaii. In this he was in concert with labor unions that feared low wage competition. At the same time, his stand opposed that of the island’s sugar planters who lobbied Washington for a Hawaii plantation laborer exemption from federal anti-Asian immigration rules.

In 1903 Pres. Theodore Roosevelt, named Republican George R. Carter Governor of Hawaii, succeeding S. B. Dole. Carter had been Secretary of the Territory (Lt. Governor). When Carter stepped up, Teddy Roosevelt appointed Atkinson as Territorial Secretary. Some note that Carter liked to emulate Pres. Roosevelt’s adventures in the fields and mountains and often left Honolulu for the wilds of Waimea, Hawaii, or for mainland hunting. Atkinson had ample experiences as Acting Governor 1903-1907. His expectation of being appointed Governor was never realized.

In 1909, he was appointed Hawaii’s U.S. District Attorney, replacing R. W. Breckons. Breckons resigned saying he couldn’t serve unless allowed to continue defending private client criminal cases in Territorial courts – while prosecuting criminals in Federal courts. The federal salary of $3000 a year [about $60,000 in 2004 dollars] was just too low. Today’s equivalent would be “I can’t afford to take a government job when I can make more in private practice.” Switching hats from defense to prosecution was not illegal then and no ethics code existed to prohibit it. Nevertheless, the public debate caused Breckons to resign. Advertiser editors after campaigning against Breckons, found A. L. C. “satisfactory” saying he had the “virtue of not being a carpet-bagger, a class that has usually boasted that it is not in Hawaii for its health.” Jack, surely no carpet bagger, by year’s end, was back in private practice himself. Hot adventures in cold Russia distracted him from civil service.

Next: Russian labor for Hawaii – or not

Thank you to attorneys Robert Miller, Michael Weight, and Calvin Young for advice on Breckons’ situation.