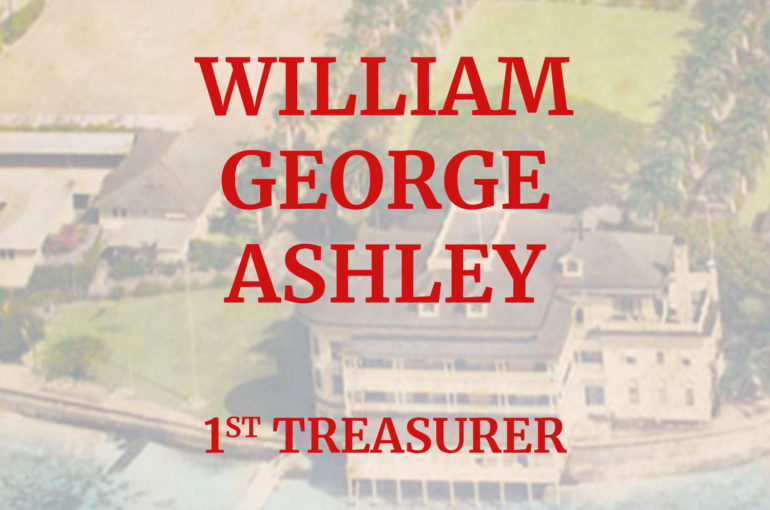 Money manager? Financial planner? CFO? Today, Elks 616 Treasurer William George Ashley might carry any of those job titles after his name. His career centered on providing financial advice. Most of his public life was related to finance, even the dark corners.

Ashley was born in California in 1855 and came to Honolulu in 1881 after 10 years in business on the mainland. He was recruited to work for B. F. Dillingham Co. A year later he married resident Kittie Torbert. Of their 6 children, son W. G. Ashley, Jr. would become an Elk and Honolulu’s chief IRS agent.

Leaving Dillingham in 1883, Ashley began job hopping. He was one of Wells Fargo’s first agents in its second attempt at business in the islands. In 1884, he moved to Grove Ranch Plantation, Maui. 1887-1889 he served as secretary of the Board of Health. He did a stint with Bishop & Co., [First Hawaiian Bank] 1898-1901. He left the bank for Honolulu Plantation, 1901-07, staying a bit longer than his usual 2 years!

Along the way he became a notary public, was corporate secretary for Oahu Railway & Land Co., 1881-93, and in 1902 experimented with his own company, Ashley & Paris Real Estate, Insurance & Custom House Brokers.

Finally in 1907 he came to E. 0. Hall & Son, staying until 1911 when he moved to Schuman Carriage Co. He stayed with Schuman until retirement.

Quiet businessman Ashley, like First Lecturing Knight Joseph Henry Fisher (Aloha Elk, Feb 2005), was a revolutionary. He appears to have had no major part in the overthrow of the monarchy, but after formation of the Provisional Government (PG) was appointed a supplemental member of the Advisory Council. Each Council meeting included detailed financial reports. The advisory council served to both rule and legislate. Merging executive and legislative branches of government consolidated PG power in the hands of an appointed, trusted few. For the Republic, Ashley served as Registrar of Public Accounts for the Treasury, 1893-98, and as a quartermaster and captain in the National Guard of Hawaii, 1895-1900. The National Guard was the army of the PG and of the Republic. For all his service on paper, Ashley received neither scorn nor praise in the opposing chronicles of the period: Queen Liliuokalani’s Hawaii’s Story by Hawaii’s Queen and L. A. Thurston’s Memoirs of the Hawaiian Revolution.

W. G. Ashley was a charter member of Elks 616, serving as the Lodge’s first Treasurer. In Sept 1901 he was appointed a member of the first House Committee with Elk Brothers Jones (Chair) and Andrews. Several times he served on Investigation committees determining fitness of proposed members. He didn’t continue as an officer, but seems to have been a member to whom officers turned when need arose. In 1908 he served a year as Organist. In 1911 he chaired a committee to thank wives and daughters for their help on an Elks Carnival. He returned to worrying about 616’s cash flow in 1912 as Finance Committee Chair.

Many of the first 616 members also belonged to other fraternal groups, business / college / ethnic clubs. Contacts these organizations provided were important in what we now term business networking. Few Elks matched Ashley’s involvement. While he never assumed higher office within the Elks he did in other groups. His obituary diplomatically described him as “active in lodge circles.” In addition to the “BPOE” Elks recognize, his obit is a sea of abbreviations. Ashley was past Chancellor Commander of Mystic Lodge, No. 1, K. P. [Knights of Pythias]; past Noble Grand of Harmony Lodge, I. 0. 0. F. [Independent Order of Odd Fellows]; member of Hawaiian Lodge No.21, A. F. & A. M. [Ancient Free and Accepted Masons]; Honolulu Commandery No. 1, K. T. [Knights Templar]; Honolulu Consistory A. A. S. R. [Ancient and Accepted Scottish Rite of Freemasons]; and Aloha Temple, N. M. S. [Ancient Arabic Order of the Nobles of the Mystic Shrine].

Memorial services for W. G. Ashley were held at the Masonic temple Sept 27, 1929. An Elks Tablet service was held and, no doubt, an 11 o’clock toast. Elk Ashley showed admirable timing in leaving. A month later, October 29, 1929, the US stock market crashed – stocks lost $10 to $15 billion in value (equal to $100 billion today). It was the very public revelation of a whole network of unsupportable economic fantasies leading to a total collapse of economies world wide. This disaster, brought on by poor financial management, would surely have scandalized Elks Treasurer Ashley.