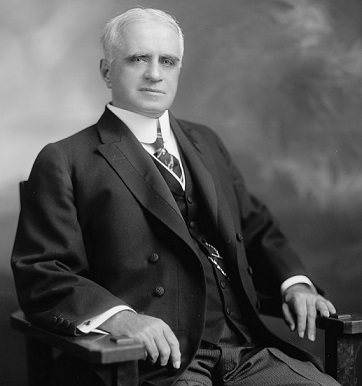 This year Governor is not on the ballot – BUT imagine you couldn’t vote for Governor. Until statehood, the U.S. President appointed Hawaii governors. The President got private advice from powerful citizens. Most folks had NO say. U.S. Presidents appointed three Elks as Governor. Pres. W. Wilson appointed Lucius E. Pinkham (1913-1918) and Charles J. McCarthy (1918-1921). Pres. F. D. Roosevelt appointed Joseph B. Poindexter (1934-1942).

Lucius Eugene Pinkham was initiated at Lodge 616, Sept. 1904. Massachusetts born, Pinkham came to Hawaii in 1891. From 1903 he served on the Board of Health during Bubonic Plague and Cholera epidemics and championed the Ala Wai Canal to control mosquitoes.

Jan. 1, 1914, Pinkham took office accepting a rose and fern lei, the room draped in maile and ilima lei. At a reception, 616 member Henry Berger led a musical program. The Hawaii National Democratic League’s Jan. 2 dinner was ‘dry’ with local and national pressure for Democrats to back prohibition, despite their national nickname “The Bourbons.”

The press held Pinkham responsible for rough times. Hawaii Shinpo wrote Pinkham had done “what little he could to stir up trouble where none existed” between allies Japan and U.S. and was “notorious for his anti-Japanese tendencies.” Advertiser editors called a Pinkham speech not stirring enough for “red-blooded Americans” opposed to “Prussianism and the murderers of women and children.” An editorial labeled Pinkham “a complete misfit” who “never once made himself plain to the community …and rarely used a sentence that was understandable.”

Pinkham resigned 616 membership April 1918. Was membership a liability? Elks were part of a very bitter World War I “prohibition is patriotism” fight. Grain should feed troops, not make alcohol. Elks wanted a beer. Was Pinkham generally unhappy after being “given the federal hook” as the Advertiser labeled his failure to be reappointed Governor. Or Did he hate being called Uncle Pink! ?