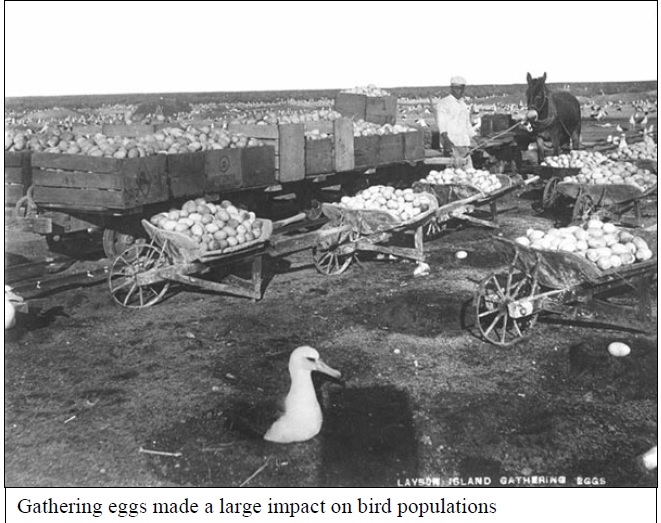 For Jack Atkinson, community service was never dull! A.L.C. Atkinson, Jack to his friends, served fellow Elks as First Trustee, his country in World War I, and fellow citizens as Secretary (Lt. Governor) of the Territory. In 1904 he was the Territory’s delegate to the American Forestry Congress. He served on commissions and boards, including Agriculture and Forestry (A&F) 1919-1925. In 1923, service as A&F President led Atkinson into adventure again.

The story begins in 1909 when Pres. Theodore Roosevelt created the Hawaiian Islands Bird Reservation after decades of contention. Debate raged for years on a familiar sounding question: to preserve or use (and how much) resources in the Northwestern Hawaiian Islands. Those islands promised wealth to eager capitalists. Seals and turtles were hunted for meat, skins, and shells. Also gathered were: bird guano for fertilizer; eggs for food and for egg albumen to print photographs; bird feathers were gathered for decoration. Guano removal disturbed the birds, but collecting wagon loads of eggs threatened their survival. Major world-wide attention came from the massive collection of bird feathers. In the 1900s, ladies were not dressed without a hat and the best hats were wildly adorned with ostentatious displays of feathers. The feathers of ostrich (photo) and many sea birds were desired. After the islands off Japan were depleted, the Pacific feather trade moved to Hawaii. Wings and tails were cut off the living bird which was released to die.

Gov Walter F. Frear (1907-13), a Roosevelt appointee, kept a file “Bird Depredations on Islands to the North West.” (NWHI) Detailed are raids (77 bird poachers on Lisianski Is. in 1904), pleadings from W. A. Bryan (former Bishop Museum ornithologist and University of Hawaii professor) for protection, and from Max Schlemmer (lessor of Laysan) for “harvesting in a regulated way”. In 1909, Roosevelt’s reserve provided paper protection for the birds. In 1910, real enforcement came from the Revenue Cutter Thetis: 23 poachers arrested with 259,000 bird wings.

In Dec 1912 when US Agriculture Dept scientists planned an expedition to the Northwest Hawaiian Islands, lame duck politicians Gov Frear and US Attorney Lindsay hitched a ride outta town. Dodging last minute problems and reporters’ questions the end-of-term politicians toured the islands and atolls. Leaving the scientists to their work, Frear and Lindsay returned Jan 1913 to a politician’s dream headline: “Gov. Frear & Party Battle with Fierce Sharks.” Atkinson and W. A. Bryan weren’t on the trip, but each used the event in notes they sent to the New York Zoological Society later in 1913.

Atkinson had no illusions about the reason for his inclusion, privately scoffing when a politically important person was introduced as a ‘scientist’ during a pre-trip briefing. Keeping his part of the bargain, Jack agreed to post Agriculture & Forestry staff D. T. Fullaway (insects) and E. Caum (plants) to the expedition for 3 months at no cost to the Museum.

Atkinson threw himself into the adventure, keeping a field notebook, recording his impressions of landing at Necker Is. June 12, 1923. His notes give us a view of the human aspects of the trip in the days before generators, plastic, and granola bars! On one steep sided island, everyone was required to be in their cot before final nightfall. Wandering in deepest darkness was forbidden to prevent falling over the side. Birds, Atkinson recorded, “made a noise that never ceases, the damnedest din one ever delighted in – day & night.”

Knowing his abilities as a scientist were minimal, he functioned as a helper and safety partner. When others pushed on, Atkinson stayed on Necker with another expedition member. Jack reported on testing of a home built radio set. “Anderson is like a kid with a new toy. He announces loudly to the entire population of Necker, me, when he makes it work. He is listening [on headphones] to broadcasts from Japan and New York; taking them down [on paper] to prove the fact to me. I am willing to take his word for it!”

Soon, reality sets in and Jack-the-explorer must turn into A. L. C. Atkinson the attorney to earn a living. Leaving the expedition, he returns to Honolulu. Jack penned this final salute to adventure:
“The most thrilling experiences of the trip were landings in the surf boat. I am used to rough landings in Hawaii, but they are in no way comparable to what our whaleboat crew saw and ran in through. My opinion of Uncle Sam’s sailors [who handled the boats] has mounted 100% – coal steady and powerful.”

for more on the Northwest Hawaiian Islands go to the Papahānaumokuākea web site http://www.papahanaumokuakea.gov/

To explore the Northwest Hawaiian Islands on the web start at http://www.hawaiireef.noaa.gov/
To see how many agencies and teachers are working together got to http://www.hawaiianatolls.org/index.php