A.L.C. Atkinson: How an Elk becomes a Moose

A.L.C. Atkinson: How an Elk becomes a Moose 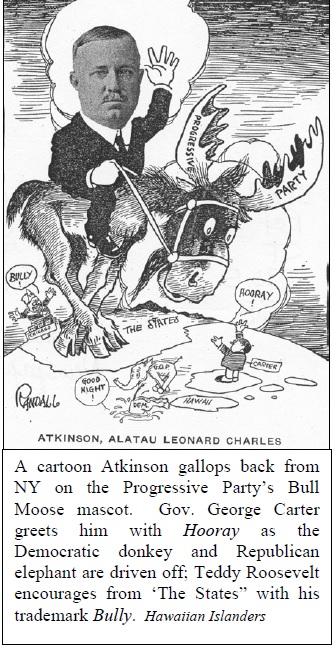 In 1912, Elk “Jack” Atkinson was loyal. He stuck with his friends in the race for the White House and bet on a moose, not an elephant. While the moose and elephant fought – the donkey won the race.

Carter and Atkinson left office when, after two terms, Pres. Roosevelt declined to run for a 3rd term. He backed his Vice-President, W. H. Taft, whom he believed would continue his policies. In 1909 Taft was elected, but soon Roosevelt began to doubt him. Back from African hunting trips, Roosevelt began courting Republican convention delegates. At the 1912 convention, by fair means or foul, depending on the reporter, Taft’s faction replaced 200 Teddy delegates with their own. A stage managed June convention re-nominated Taft with Hawaii’s Gov Frear attending. Furious, Teddy and other break-away Republicans joined the Progressive Party.

The Progressive platform backed goals years ahead of that era’s mainstream politics: primary elections (not secret caucuses) to nominate candidates; women’s right to vote; referendum, recall, and initiative; an end to child labor; ‘national social insurance’. Their July convention broke new ground, BUT as Hawaii found, there were limits to progressive attitudes. Yes to never-before numbers of Catholic, Jewish, and first generation American delegates. Yes to women delegates who could not yet vote in any election. No to a Hawaii delegate. Reason? Hawaii, not a state, had no Electoral College vote. Hawaii fought back: Territory Hawaii was in line for statehood and a vote (unlike Puerto Rico and the Philippines). Atkinson, Hawaii’s rep, sailed for San Francisco unsure of a seat. Between his on-site arguments and those telegrammed from home, Jack won delegate status at the Chicago convention. After nominating Roosevelt, the party was nicknamed Bull Moose. After the convention, Atkinson became National Committeeman for Hawaii and worked much of 1912 at the Bull Moose NY campaign offices.

Four parties ran presidential candidates in 1912: Democrat, Progressive, Republican, and Socialist. Wilson (D) won 42% of the popular vote and a majority of the Electoral College votes. The opposition vote was divided by the argument between Roosevelt (Progressives got 28%) and Taft (Republicans got 23%), plus the 6% of voters who went with labor leader Socialist Party’s Eugene Debs.

After adventures in Russia and the Northwestern Hawaiian Islands, and national politics, life was quieter for Jack. In 1925 his wife inherited substantial Chicago area property and they relocated to the mainland. Atkinson gifted his law library to the University of Hawaii and closed his office, but maintained his 616 Elks’ membership. The 1922 loss of his home and family memorabilia in a Puuloa Ranch fire perhaps made the move easier.

In 1927, the Advertiser announced “Jack’s Back” over a story describing a visit home. A. L. C. enjoyed the celebrity of return. He spoke to a 90th anniversary lunch for University of Michigan grads. He talked to the Hawaiian Historical Society about Hawaii documents in the British Archives. He visited with friends, spent time in the country, and took a trip to Hilo making a circuit of the island. At Hilo he suffered a heart attack and passed away before his wife could make the long rail and sea voyage from Chicago.

Obituaries recall A. L. C. Atkinson’s youthful sports career, his government service, and refer to him as “a Republican with Bull Moose tendencies.” In death, he left the Hawaii field as the players and the rules began to change. In a touch of irony, considering his early anti-Asian labor stand, two days before his funeral, the Elks baseball team lost by one home run to a team named “All Chinese.” Hawaii was changing. Days after Jack’s funeral Charles Lindbergh took off on his to-be-successful non-stop New York to Paris flight. The world was changing.