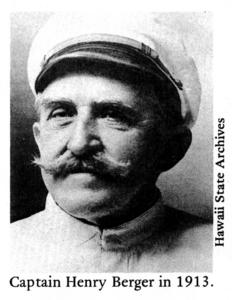 Elk Henry Berger, director of the Royal Hawaiian Band, served as 616’s first Organist. Berger’s appointment was not honorary. He provided the musical accompaniment for lodge activities. August 4th will be his 172nd birthday.

Born Heinrich Wilhelm Berger in Prussia, he came to Hawaii in 1872, staying until his death in 1929. Berger diplomatically kept all factions as friends through 4 governments. The best known example is the August 1914 celebration of his birthday in an Iolani Palace lawn party. To honor Berger, adversaries Queen Liliuokalani and former Provisional Government / Republic President Sanford B. Dole1 – then a judge – were willing to sit side by side on the Iolani Palace lanai, sharing the stage in testimony of their respect and aloha for Berger, with jaws clamped, staring straight ahead. They were joined by Elk and Gov. Lucius E. Pinkham and Mayor J. J. Fern.

The lawn party started with musical numbers followed by speeches, then more music. First Dole’s speech was read by Thelma Murphy2, his voice being weak. Queen Liliuokalani then pinned a gold medal on Berger’s uniform. PER (1910-11) J. D. Dougherty’s Wall & Dougherty Jewelers made the medal commissioned by Royal Hawaiian Band members for the occasion. Her duty done, Berger “assisted the Queen to her chair and kissed her hand in token of fealty and affection, [as] a great wave of applause swept through the crowd.”

Mayor J. J. Fern gave a “short address” and presented Berger with a congratulatory resolution, rolled and beribboned. Pinkham gave a “lengthy speech” and presented a silver clad baton. A cross-section of Honolulu turned out for the party and to hear the musical program including Kohala March, Stars and Stripes, Aloha Oe, and Hawaii Ponoi.

Finally Berger spoke, showing his sense of humor by telling the audience: “You were lucky to get me.” His emotions came through as he told band members and the crowd: “What I have done is all for you…your beautiful music will be known to the world…” And so it is. Mahalo nui loa, Elk Berger.