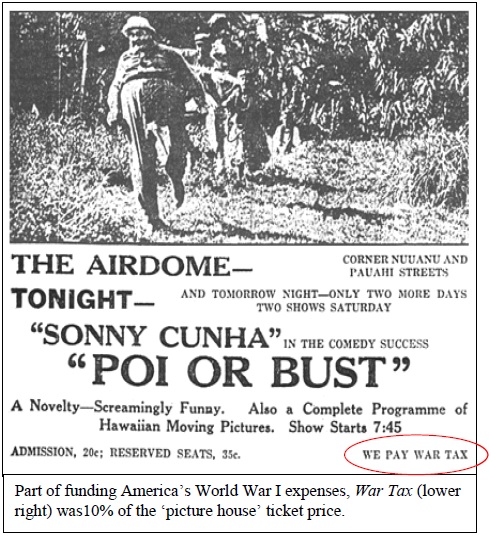 In a June 2001 story I wrote that Albert Richard “Sonny” Cunha (616’s first Tiler) played the lead character in a 1918 film comedy, “Poi or Bust,” but that nothing was known about the film. Then chance has smiled. During a search on another topic, I tripped over an ad for the film.

In 1918, the movie business was the Wild West. A quick, low-investment form of theater was the airdome: throw up a fence and the roof was air. Honolulu’s Airdome was created at the corner of Nuuanu and Pauahi streets by William F. Aldrich as a venue for his own productions. Buying what was billed as Hawaii’s first rain insurance, got him opening night publicity. Aldrich claimed seating for 2000 (“every comfort for patrons”) plus a ‘box’ for dignitaries such as Elk / Governor Pinkham and Mayor Fern. Hawaii’s first drive-in? “Space for 50 automobiles. Sit in your car and watch the show.”

The Airdome opened April 20, 1918, with “Hawaiian moving pictures”: Queen Liliuokalani’s funeral, Liberty Bond drive raising funds for the Great War, Hula dancers on film, Trip around the Island, and A day in Honolulu. The Volcano of Kilauea featured wife Peggy Aldrich, surviving a Kilauea volcano hike. News stories blur who shot the footage: Aldrich or / and cameraman Robert K. Bonine, a Canadian living in Hawaii after a career with Edison. Live music by a glee club and band animated the silent, intertitled films. The tour industry wanted the scenics to show in theaters nationwide as ‘destination Hawaii’ advertising. Boosters saw a new Hawaii industry in filming: “As conditions are favorable to moving pictures the venture should be a success.”

Competition was stiff for the Airdome: the Queen’s funeral as filmed by Eddie (E. K.) Fernandez showed at the Bijou and Hawaii theaters; Hollywood’s Mary Pickford was at the Liberty Theater. Magicians, a week-long amateur contest, and the can’t-miss 8th serial in Lost Express! also competed for viewer attention.

Headliner Poi or Bust (2- reels, 20 minutes) came on the bill April 30th. The plot was simple: Sonny is searching for enough poi to feed his clan: a scolding or buxom wife and 9 or 19 children – depending on the reporter. Scenics showed off Honolulu: Kakaako to Waikiki. Incredibly, Kapiolani Park’s elephant Daisy, a hula dancer, and youths shooting craps make appearances. Fast moving Aldrich “picturized” the story in a week as police held back curious crowds on location.

Opening night saw “automobiles lining both sides of Pauahi St. and around to Fort and Nuuanu Sts.” Reviewers describe audience reaction as “gales of laughter”, “side splitting,” the film as a “howling success.” Patrons “got their money’s worth” (35¢ / 1918 = $5.00 now). The 300 pound Cunha was expected to become a nationwide comedy star, one reviewer labeling him the “next Fatty Arbuckle.”

Poi or Bust attendance supported 2 shows some evenings and extended the run. To freshen the program, reels of the recent Red Cross parade were added on May 10, 1918. Footage of the May 11 parade honoring Hawaii men shipping out to France screened the next day. Part of the draw was seeing you, your family, or neighbors on the big screen. Poi closed on May 11.

Don’t get a swelled head…the film wasn’t the center of attention. The world war was the big news, including the fighting in Bagdad. Film ads and reviews appeared only in English papers: Hawaiian Ke Aloha Aina noted the appointment of Elk C. J. McCarthy, Queen Liliuokalani’s 1893 defender, as Territorial Governor. Kuokoa ran an installment of the thriller He Moolelo no Tazana (Tarzan). In Portuguese, O Luso featured the coming Festa de Espirito Santo, Cathedral Catholica, Fort St. Poi or Bust got no mention in Elks minutes; no official Elks party at the movies. Some of Aldrich’s claims ($3000 construction [$47,000 today] for example) may have been Hollywood hype.

Early movie film was chemically unstable, so it is unlikely we’ll ever see Sonny Cunha “expressive of countenance” “bursting into the movies with considerable éclat.” But Sonny would be sure to “See ‘ya at the movies!”