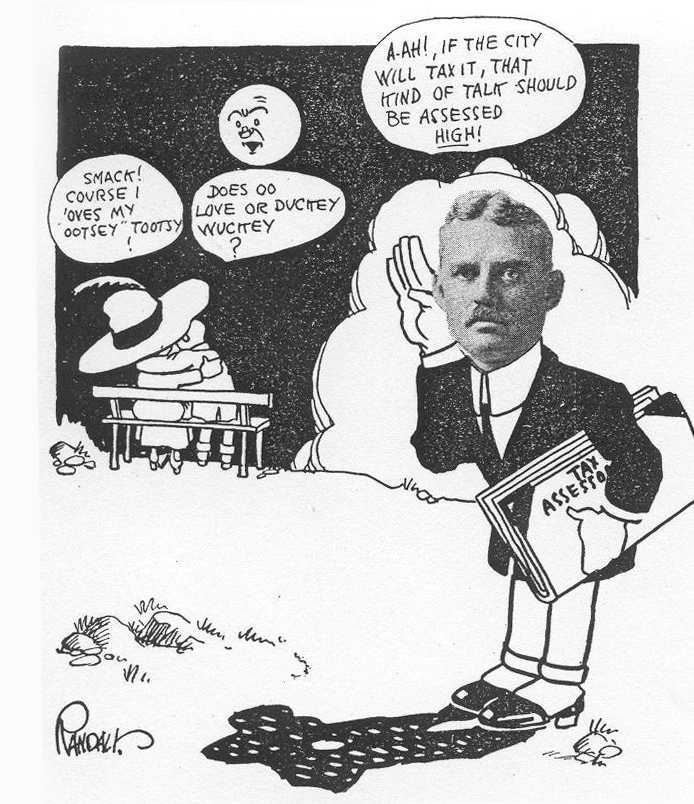 Wilder is caricatured as a man who would tax even lovers’ sweet talk. Hawaiian Islanders

We groan as we think of TAXES in April. Not so Charles Thomas Wilder, first Chaplin of 616. He thought about taxes daily!

Born in Geneva, Ill., in 1866, Wilder’s parents brought him to Hawaii at age 3. He attended Punahou (where he played baseball), worked as a clerk at Wilder Steamship Co., then went to Ohio’s Miami University. He returned to Honolulu, working 1885-93 in Wilder & Co., the family building materials business.

In common with several founding Elks, Wilder was an annexationist. He was a Captain in the Honolulu Rifles 1885-1893. In 1893 the Provisional Government named C. T. Wilder, only 27, as Consul-General at San Francisco until annexation to the United States made the post obsolete. One of his last duties was penning an article “Fine field for capital” in the monthly magazine Paradise of the Pacific: Hawaii for Health, Pleasure & Profit. In 1899 Wilder wrote the “number of people intending to go to Hawaii within the next year are positively alarming.” He encouraged “the enterprising American” to find in Hawaii “excellent opportunities for profitable investments,” but warned “haole apiki” [swindlers, carpetbaggers, idlers, and speculators] to give Hawaii a wide berth”!

After annexation Wilder returned to the Islands, living at the family home on Pensacola. He was active in the Democratic Party, joining Prince David Kawananakoa, John D. Holt and others at the 1900 national convention. Wilder worked as an insurance agent, applied for government positions, then left the islands to try the saw-mill business in Oregon, 1902-03.

In 1904 Wilder was back in the Islands and appointed Honolulu’s Deputy Income Tax Assessor. 1908: he moved up to Tax Assessor holding the position until Oct 1929. It was a position of great power and that made him great enemies. A new Territorial Treasurer and Governor took office and Wilder, now 63, was ‘asked to resign’ to allow hiring “younger men.” His firing shared headlines with the stock market panic and President Herbert Hoover’s reassurances of America’s economic strength. In a move that surprised his business enemies, Wilder was immediately named Chair of the Board of Tax Equalization serving until 1932. Many businesses and individuals were suddenly penniless. Not surprising then that Wilder’s expectation of a $20.00 (2007=$240) per diem for each meeting of the Equalization Board on top of a monthly pension of $205 (2007=$2464) was the stuff of headlines.

In his early years, Wilder was a member of the Knights of Pythias, serving as a Chancellor. For business contacts, the Pacific, Commercial, and Oahu Country Clubs were helpful. Wilder also was active in yachting, serving as the Commodore of Hawaii Yacht Club in 1908. He was crew or captain in many local races and in the Trans-Pacific Yacht Race, most importantly as Captain of the winning yacht Hawaii in 1910. After his racing career ended, he was involved in supporting the Trans-Pac race locally.

C. T. Wilder accepted appointment as 616’s Chaplin in the organizational meeting. He served on committees to investigate new members and to draft by-laws. Because of his youthful baseball experiences, he was part of the Lodge’s first attempt to organize a team. He was elected Loyal Knight when the position became vacant in Jan 1902. Despite these expressions of interest and dedication, when Wilder left Hawaii later in 1902 to try mainland business ventures, he left behind his membership in 616. His brother Harry, however, continued as a 616 Elk until his 1948 death in San Francisco.